Meditation In A Time Of Social Isolation: St. Francis 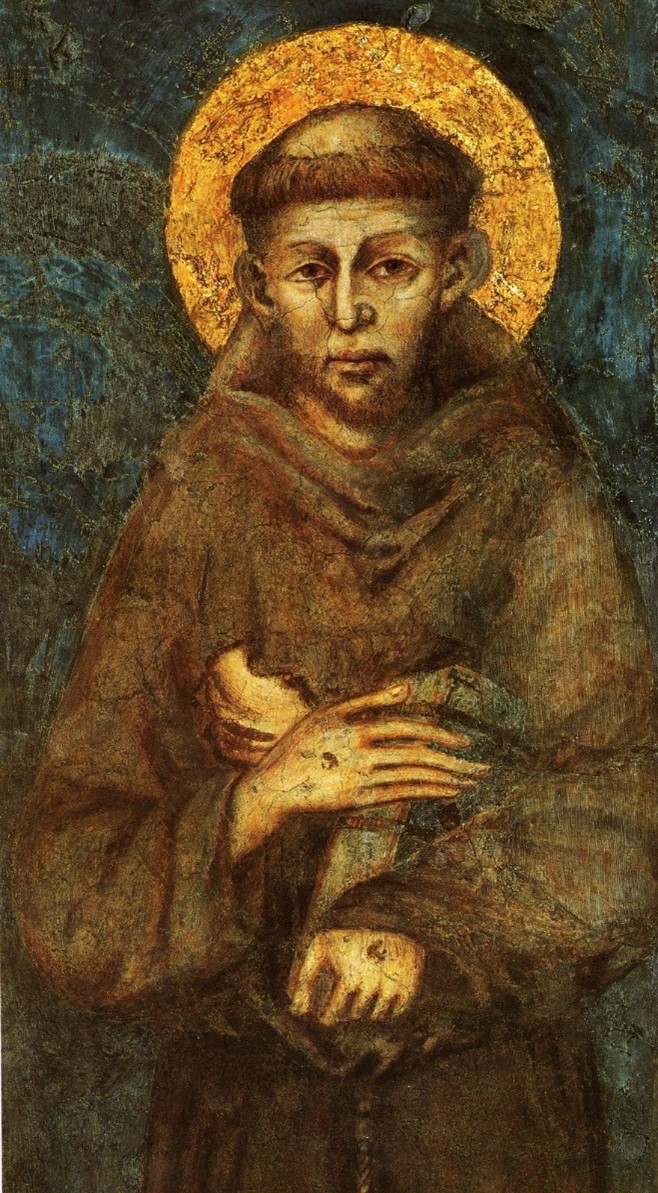 Praised be my Lord

by means of all Your creatures

and most especially by Sir Brother Sun…

For he is beautiful and radiant with great splendor

And is a symbol of You, God Most High.

Francis is the “God-intoxicated” saint, wholly caught up in the beauty of God. It is a beauty that spills over, and the world dances.

Praised be my Lord, by means of Brother Fire,…

For he is fair and gay and mighty and strong.

The world for St. Francis is charged with the grandeur of God; it flames out in the things that are seen. The world is charged with the praise of God; each beauty of moon and wind and water (“for she is very useful, humble, precious and chaste”) speaks God to those who see. This is creation’s song of thanksgiving to God.

It is not only (as we usually think) that Francis is the friend of all God’s creatures. It is that he is wholly given over to God. It is God’s grace he sees in all things—in the sun’s gift of light; in the clarity of moon; in sister earth who feeds us—and at the abundance of this grace he is overwhelmed with joy. All of life, all things and all creatures, are God’s own creation and so all of life is for Francis a song of praise.

There is however a mystery in this grace of God.

Everyone knows Francis’ Canticle of Brother Sun. What is not so well known is that he wrote it in the midst of great suffering. Francis was dying when he wrote this song. It ends, in fact, with the song of sister death.

Praised be my Lord, through our sister Bodily Death,

From whom no living person can escape….

Praise and bless my Lord, and thank him.

That God may be praised through death…, that dying may be the occasion for this saint’s greatest song of praise: here is a mystery. It is at the heart of who St. Francis is.

It was not always this way. As a young man Francis was, it seems, a good-natured rake. He was the life of every party; he adored handsome clothes and good horses; he spent his parents’ considerable income freely. He was charming. And he could not abide anything ugly or squalid or sick. He had a special abhorrence of the local lepers. There was certainly for him no intimation of glory in the beggar’s rags, or the suffering of the sick.

Then a series of “divine visitations” or “strokes,” as Fr. John Moorman calls them, prepared perhaps by a year in prison in Perugia after a nasty battle between neighboring towns which Assisi lost.

First, a dream as he set out once again for battle. He rode out of town to the cheers of the townspeople in clothes and on a horse fit for a knight…and rode back in to general bewilderment the next day. “Why do you leave the Lord for the servant?” a voice asked him in the night. “Go home and I will tell you what to do.”

Then, in the middle of yet another party (the Lord not yet having told him what to do), as he and his friends caroused around the town he suddenly stood stock-still. When his companions discovered him later, still immobile, he said, “I am in love with a bride nobler, richer and fairer than you have ever seen.”

He began to give things away—money; clothes; at Rome when he saw the pittance many of the pilgrims were giving at St. Peter’s he threw his entire purse threw the grate…and had to beg, as a result, for his food. He met a leper on the road near home, and for the first time stopped, got off his horse, and kissed the leper’s hand.

“The Lord gave to me, Brother Francis,” he wrote in his will years later, “thus to begin to do penance. For when I was in sin it seemed very bitter to me to see lepers, and the Lord Himself led me among them, …and what had seemed to me bitter was changed into sweetness of body and soul.” (Opuscula S. Francisci, ed. Quaracchi, 1904, p. 77, in John R. H. Moorman, Saint Francis of Assisi [London: SPCK, 1963], 10.) And finally, as he prayed in front of the crucifix of San Damiano, down the hill from Assisi, Christ spoke to him from the cross: “Francis, go and repair my church which, as you see, is falling down.”

The story goes on: how Francis leaped up and ran home to steal expensive cloth and a horse from his father to pay for repairs to the church; how his father dragged him in a rage in front of the bishop’s court; how the bishop told him he must give back to his father what was his. And so Francis stripped off his clothes in the public square and said, “I give him back the money he was so angry about and all the clothes I have had from him.” Until now I have called Pietro Bernardone my father, from now on I intend to serve the Lord. (see Moorman 1963: 16).

Francis had the gift of taking God’s word seriously. If Christ told him from the cross to rebuild his church, he did it, stone by stone. If Jesus said, “Blessed are the poor—and poor in spirit” Francis gave away his clothes and money and begged for food. To the end of his life he wore only sackcloth; he forbade his brothers even to touch a coin. They could and should work, but they were paid in kind. Lady Poverty, and the humility that is her inner counterpart, became Francis’ highest ideal.

And if it was on the cross that God’s love for all the people was in Christ finally made known, then it was in suffering as Jesus did—with and for others—that life’s joy was to be found.

Francis went from fearing and abhorring lepers to living among them. He and his brothers had a constant ministry to the lepers, bathing them and providing them with food and friendship. Praised be my Lord, through those who…suffer sickness and tribulation—for in them Christ may be seen.

Praised be my Lord, finally, through our sister Bodily Death: because it is in dying that we are brought into our true life. Even death may, in Christ, be a gift.

So is the world changed by the cross of Christ, and those that are least and last and poor and dying become the very first.

Francis saw in the crucified Christ the great heart of God, this love that seeing such suffering, such wandering, such wrong, does not turn away from the world but kisses this world and lifts us up.

And so the earth is radiant, and the lepers above all are blessed.

Francis preached to the birds, and wept for their joy, because he had not thought to tell them of Christ before.

There was no creature so small that God did not die for love of it.

Francis was God-intoxicated, and so he embraced the cross. On the blessing he wrote for Brother Leo, his constant companion and friend, he made the sign of the cross: the Tau, and the skull. St. Francis took humility seriously, and understood that even suffering was, in God’s hands—by the nails in the hands of the Christ—a gift. So the earth for Francis was lit in every moment with the glory of God, and at his dying he sang with all creatures God’s praise.

Almighty, most holy, most high and supreme God,

Who alone are good:

To You we render all praise, all glory, all grace,

All honor, all blessing and everything that is good.