Meditation In A Time Of Social Isolation: Rahab 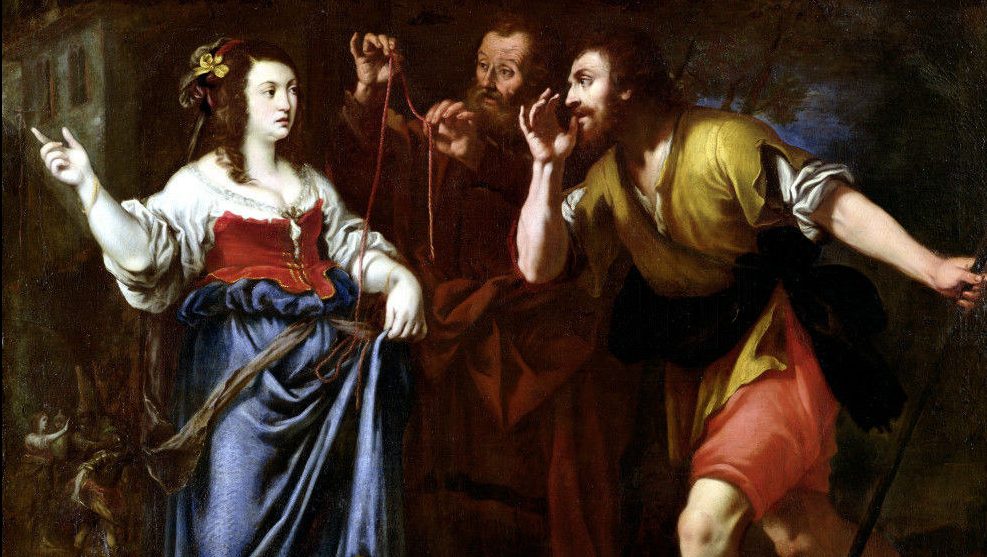 In our Daily Office trek with the Israelites through the wilderness this summer, we have arrived at Rahab. Rahab is the prostitute of Jericho who lives in the city wall, with a window facing out. She is a Canaanite, no member of God’s people. But she becomes in Matthew’s gospel the great-great-great-grandmother of King David and the ancestor of Jesus the Christ.

This is startling. That Matthew names Rahab at all is curious, because Jewish genealogies did not usually name women (compare Luke, who names no women in Jesus’ genealogy, even though his gospel is known for its interest in women). That he names her as Salmon’s wife is curious, because she appears as Salmon’s wife nowhere else in the Bible or in Jewish tradition. That he names her the foremother of the Christ is remarkable, because she is a Gentile and a prostitute.

Why does Matthew name Rahab?

For the Jewish reader who knows the scriptures, her name calls up her story. And what a story it is. Rahab stands right at the crucial juncture in Israel’s history: here are the Hebrews, forty years older, having made it through the Red Sea and through the wilderness, now at last on the edge of the promised land. Jericho is before them.

But Jericho is big and walled and powerful, and the Israelites are afraid. Joshua sends in spies to get the lay of the land. They reconnoitre. They spend the night with Rahab. They are discovered. The king sends men to arrest them. In the nick of time Rahab hides them up on the roof, amongst the stalks of flax.

“Where are those spies?” the king’s men ask. Hand them over. We know they stayed with you.

“Oh, those men?” Rahab says. I didn’t know they were spies. They just left. They went that way. Hurry! You might catch them.

And then she sends the Israelite spies up into the mountains. Don’t come down for three days, she says.

“Then she let them down by a rope through her window, for her house was on the outer side of the city wall and she lived within the wall itself.” (Josh 2:15).

Rahab saves the Israelites – a prostitute cons the king – and that in itself is enough. But there is also the reason she does it. She hides the spies who come to take her own city because she nows that they serve the living God.

“The Lord your God is indeed God in heaven above and on earth below,” she says to the two men as she saves them (2:11). She knows about the Exodus and the Red Sea; she knows about their deliverance from Egypt “and what you did to the two kings of the Amorites that were beyond the Jordan, to Sihon and Og, whom you utterly destroyed.” (Josh 2:10).

When Rahab says this she echoes the Song of Moses and Miriam. As they stand on the safe side of the Red Sea, as the sea covers the chariots of Egypt and the chariot drivers, Miriam sings this song:

“I will sing to the Lord,
For he has triumphed gloriously.
Horse and rider he has thrown into the sea”

“All the inhabitants of Canaan melted away.

Terror and dread fell upon them.

Rahab says to the Israelites, “Dread of you has fallen upon us, and all the inhabitants of the land melt in fear before you” (Josh 2:9). This moment, as the Israelites stand at the gates of Jericho, as the King of Jericho pursues them just as the King of Egypt pursued their fathers; this moment is like that one. God is fulfilling his purpose now in Rahab and these two men as he fulfilled it in the days of Moses.

“I know,” Rahab says, “that the Lord has given you this land.”

Rahab is a woman of faith. Though she is a gentile – a Canaanite, at that! – though she is a prostitute, she sees the hand of God upon history in this people Israel and she acknowledges Israel’s God as King.

The Lord your God is indeed God in heaven above and earth below.

She is the voice of faith rising unexpectedly at the heart of Canaan. She knows that God is king, and so she faces down the other king, the earthly king, the king of Jericho.

And so she saves the Israelites, and so they lift up the Ark of the Covenant and carry it across the Jordan on dry ground, and so they arch around the city with the Ark of the Covenant, seven priests with seven trumpets for seven days, leading the whole people around the walls of Jericho. And on the seventh day at the seventh time around, the whole people shout and “the walls of the city fell down flat” (Josh 6:20).

(I would say it is a fairy tale, except that I too have seen the wall of a city fall down flat, in real time, in Berlin, in 1989.)

Rahab sees what God is doing in this people Israel and she confesses that God is King. And in her faith she prospers God’s people.

Indeed, she is like Moses’ mother. When she hides the men on her roof, the Hebrew text says, “But the woman took the two men and hid him” (2:4). Him, singular, though there are two men. Why “him”?

Is there, in that odd “him,” an echo of Exodus?

It is no small part Rahab plays in the story of the faith. No wonder Matthew names her. With her, this Canaanite, the prostitute, this woman; through her faith, the Exodus comes to its goal and appointed end.

Nor is this the last time that a woman and a Canaanite will in Matthew’s gospel – in the gospel of Jesus Christ – confess her faith in Israel’s Lord. It is a Canaanite who will call Jesus “Lord, Son of David” – King – as she kneels before him and asks him to heal her daughter. It is a woman who will pour out precious oil upon Jesus’ head at dinner one night, naming him King as he goes to the cross. And it is women who will find the tomb empty, who will hear the good news, who will see Jesus risen…who will, first among the disciples, throw themselves at his feet and worship him (Matt 28:9).

Rahab: Canaanite, woman, prostitute. Mother of the Christ. Mother in the faith.

*The great OT scholar Tikva Frymer-Kensky notes this, in Women in Scripture: A Dictionary of Named and Unnamed Women in the Hebrew Bible, the Apocryphal, Deuterocanonical Books, and the New Testament, edited by Carol Meyers, Toni Newsom and Ross S. Kraemer.