Meditation In A Time Of Social Isolation: Monnica, mother of Augustine 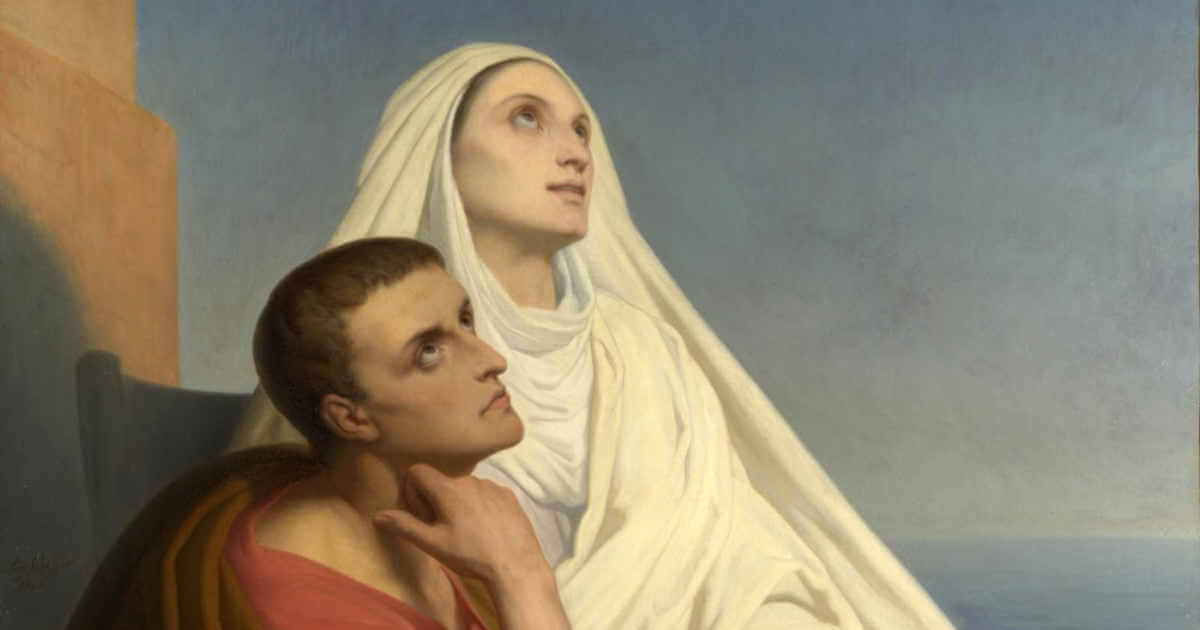 To whom shall I turn for the gift of your coming into my heart and filling it to the brim?” St. Augustine says to his God. “Why do you mean so much to me? Help me find words to explain. Why do I mean so much to you, that you should command me to love you?”

We celebrate Augustine’s feast day on August 28. On August 27 we celebrate Monnica his mother. “Why do you mean so much to me?” Augustine says to God in his Confessions. For Monnica, those words are the answer to her whole life’s prayer.

As a young man Augustine was not a Christian. He preferred first the Manichees, gnostic dualists (and vegetarians and teetotalers) who taught that God was not all-powerful and the material world was disgusting and the cross was not a real event but a symbol of suffering humanity, and then Plato and Plotinus and the scholars who gathered around their works. He found the Bible in the Old Latin translations crude, its rough language painful to a young man who wept over Virgil’s dying Dido and admired the well-turned phrases of a Cicero. He loved games and the theatre and sex. “I was burning to find satisfaction in hellish pleasures,” he says of himself as a young man; “I ran wild in the shadowy jungle of erotic adventures…I traveled very far from you,” Augustine says to his God, “and you did not stop me” (Confessions, trans. Henry Chadwick, Oxford World Classics [Oxford: Oxford University Press, 1991], 24).

But all the time, his mother prayed. And she talked with him. When “the thorns of lust rose above my head,” she talked to him of chastity. “I well remember what her wishes were and how she most earnestly warned me not to commit fornication and above all not to seduce any man’s wife.” I would have been embarrassed to heed her, Augustine says, “but all the while you were speaking to me through her” (Pine-Coffin, 46). In her words the sound of God’s voice, though he did not know it.

Monnica loved her son. When he left Carthage (in present-day Tunisia) to teach in Rome, where he had heard that the students were less obnoxious, he had to slip away by night because she did not want him to go. She wept and lamented, and then “turned again to you to offer her prayers for me” (Pine-Coffin, 101). She followed him, eventually, and Augustine greeted her with the news that he was no longer a Manichee. This was an answer to her prayers – but she did not leap for joy, because he was not yet a catholic Christian.

Augustine was in Milan by then (the students in Rome having proved as dishonest as the students in Carthage were obnoxious) and she, like her son, was entranced by Ambrose, Bishop of Milan. “She loved that man as an angel of God,” Augustine says, “when she knew that it was through him that I had been brought to that state of hesitancy and wavering” (Chadwick, 91), no longer a Manichee but not yet a Christian, doubting, in fact, that any such thing as truth could be found. She used to run to the church to hang on Ambrose’s lips. And when the Arian queen Justina began to persecute Ambrose, Monnica led the congregation in anxious vigil and prayer.

Augustine paints a picture of a mother and son who love each other dearly and, what is perhaps more rare, can talk to each other with both heart and mind. Monnica stayed and prayed with Augustine and his friends throughout his time in Milan, so that when the moment of his conversion came, she was there.

In tears in the garden, fighting in his heart the old battle (“my old loves held me back,” he says, the theatre, the games, all the desires of the flesh; “Tomorrow, tomorrow,” I’ll give up my old life tomorrow, he said [Chadwick, 151, 2) he heard suddenly a child’s voice calling, “Pick up and read, pick up and read!” He could not think of any child’s game to which that chant belonged…was it then in the child the voice of God? He ran back and opened the Bible he had left on the garden bench and lighted upon Paul’s letter to the Romans: “put on the Lord Jesus Christ and make no provision for the flesh in its desires” (Rom 13:14). “A light of relief,” he says, “flooded into my heart,” and he realized he was ready to be baptized (Chadwick 153).

He and his friend Alypius went in and told Monnica. “She was filled with joy…She exulted…and blessed you who ‘are powerful to do more than we’” can ask or imagine. You converted me to yourself, Augustine says to God, “so that I no longer desired a wife or placed any hope in this world but stood firmly upon the rule of faith, where you had shown me to her in a dream so many years before” (Pine-Coffin, 179).

Days before her death, Monnica and Augustine are still talking. They are leaning on a window ledge overlooking another garden, talking about what heaven might be like.

“In the presence of Truth, which is yourself, we were wondering what the eternal life of the saints would be like…We laid the lips of our hearts to the heavenly stream that flows from your fountain…The flame of love burned stronger in us and raised us higher toward the eternal God…And while we spoke of the eternal Wisdom, longing for it and straining for it with all the strength of our hearts, for one fleeting instant we reached out and touched it”.

With her, in conversation with her, in the word they shared, Augustine is lifted up for an instant into the contemplation of eternal Being.

All his life, from his wild youth to his episcopal old age, Augustine loves the word. Aeneas and Dido, Terence and Cicero, in the words of the poet and rhetor they hold his heart in thrall. It is not surprising, perhaps, that it is in the Word (“Pick up and read!”) that he discovers Christ, and the courage to give over his life to Him. “I read the Psalm,” he says immediately after that moment in the garden, “and there was fire in my heart” (Pine-Coffin, 188).

How much of the brilliance of Augustine’s faith, the shining power of the words in which he poured out his heart to God in volume after volume through all the days of his life, how much of his word of faith do we owe to Monnica?

She was human, a human being like any other. When she was a girl, she tells her son, she liked to drink the wine from the cask in the basement before she took the flask up to her parents; she clung to her son at his first leaving with a degree of devotion which could not have been good for her or for him. But in her love and in her faith and in her prayer – and always, in her word, their words together, seeking the One who is the Word – Augustine finds himself drawn slowly and surely to “the voice of the One whom we love in all created things” (Pine-Coffin, 190).

“You stir us to take pleasure in you, because you have made us for yourself, and our hearts are restless until they find their rest in you”

Behind these words and so many others of power and beauty, it is not just Augustine but Monnica who stands. So they stand here at the end of August all these years later side by side, together in the faith of the church just as they were together finally, to Monnica’s great joy, in faith in their lives.

[[There is perhaps no one who did more to shape the church’s faith and life . He combatted the Manichees and the Donatists (who refused to allow Christians who had apostatized under persecution back into the church) and the Pelagians (who held that people could take the fundamental steps toward salvation by their own efforts, apart from grace). He wrote works on the Trinity, on Christian doctrine, on marriage, on lying, on the creed, on patience; works that still shape the thought of the church. And when Rome was falling, when the barbarians were literally at the gates, he turned that time of disintegration and defeat into City of God, great statement of the distinction between all human cities/politics and the reign of God. ]]